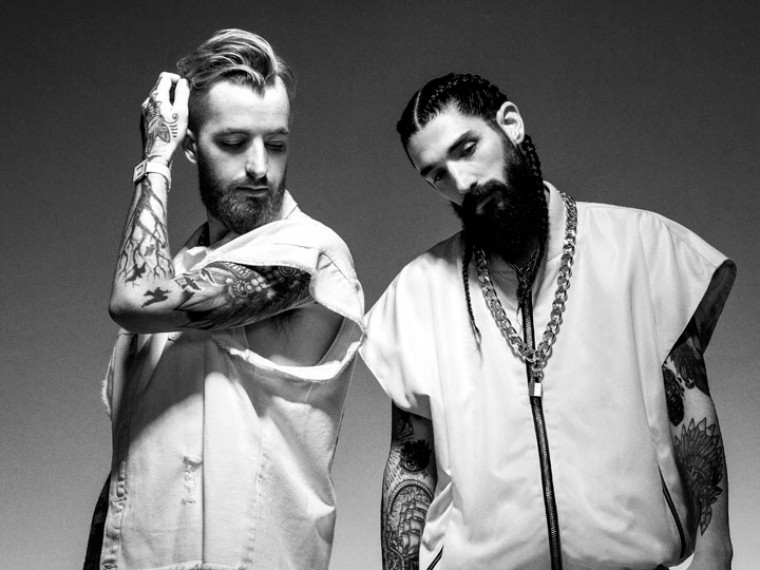 Two bearded Austin, TX musical misfits with an affinity for D.I.Y. electronic/altproduction, clever lyrical quips, and sticky alternative hooks, Missio regularly subvert expectations. Case in point, an upbeat lullaby-esque melody about, "Throwing middle fingers in the air" introduced the duo -- Matthew Brue & David Butler -- to audiences everywhere with the aptly titled breakout single, "Middle Fingers." At the beginning of 2017, the track exploded on SiriusXM's Alt Nation, and the band landed a deal with RCA Records. This signature style stands out as the product of their unique and undeniable union as well as years of dedication. Founded in 2014 as a side project for Matthew, longtime friend David joined him after one studio session.

"At the time, we were both coming out of other bands," recalls Matthew. "I called him to play these demos I had. We were in the same spot musically, and we just related to each other."

"There's no bullshit in Missio," David declares. "It's all from the heart and genuine. The balance between us is perfect. Matthew is more of a classic songwriter who will sit down and write melodies for hours. I bring my producer background. I love arranging, I love beats, and I love sounds. The marriage of those two worlds completes a puzzle."

For all of the harmony between them, their respective backgrounds represent something of a Yin and Yang. Born and raised in Colorado, Matthew received classical piano training as a child and toured the world in a choir. In Houston, seven years his senior David "grew up in the least musical household ever" and didn't pick up guitar until the age of 16. David escaped the Office Space-style corporate world in order to pursue a career as a producer and audio engineer, while Matthew spent a year living in a remodeled 1974 Airstream, "learning how to write better songs." They had crossed paths many times in the Austin music scene, but their initial collaboration would prove life-changing -- literally.

"When we were in the studio, we just started talking about our lives," David goes on. "Completely unplanned, I mentioned that my wife and I were looking for a roommate..."

"I told him that I was thinking about moving out of the Airstream," laughs Matthew. "We've been roommates for as long as the band has existed."

David transformed the garage into a professional recording studio, ripping down walls by hand, tearing up the floors, constructing a control room, setting up iso booths, and designing a veritable creative hive for the band. He would handle the bulk of the production as Matthew penned lyrics and took on lead vocals. In between their SXSW debut in 2015 and tours with Australia's Sasia and K. Flay (for which David built Missio's light rigs), they wrote and recorded countless songs. "I Don't Even Care About You" landed at #7 on Spotify's Top 50 Global Viral Chart after popping up on the Fresh Finds Playlist. As buzz grew, their music appeared on MTV's Scream and Finding Carter, Oxygen's Bad Girls Club, and in a Victoria's Secret spot. With its keyboard boom, handclaps, and sweeping chant, "Middle Fingers" ignited their profile, rhyming social media-worthy lines like, "I am tired of seeing pretty people everywhere" and "I used to drink with whisky now I'm stuck with Perrier."

"That was actually the very first song we sat down together and wrote," says Matthew. "I felt like, 'Fuck everything right now.' When you hear something like 'Middle Fingers,' you would assume it's a fuck you to the world. It's actually not. In a way, it's a song about unity. It's not fuck you; it's fuck this situation, which everyone can apply to their own lives. There's no better feeling than seeing hundreds of people from different religious and political backgrounds forget about everything and raise their fingers together. Flipping the bird can unite us."

Everything encases a powerful message for the guys. In Latin, Missio translates to "Mission."

"Before we started the band, I got Missio tattooed on my wrist," Matthew continues. "I have a history of addiction and being in recovery. It's something I deal with every day. I fell in love with the word, because it helped me focus on being sober and having a mission towards that. It transitioned into this music."

As Missio prepare their full-length debut Loner for release, Matthew and David are on a mission to connect with listeners everywhere.

"There's a deeper side to Missio," David leaves off. "We both love hook-y music and inspiring beats, but what we value most is honesty. I hope that comes across and can be something audiences rely on."

"As a whole, all of the songs revolve around being in seclusion," Matthew concludes. "There are so many people out there who feel that isolation. Being in a band with this sort of lyrical content, it's all about reaching listeners, meeting them at shows, hearing their stories, and helping them feel like they can relate to someone. Maybe we can make the world feel not so alone."