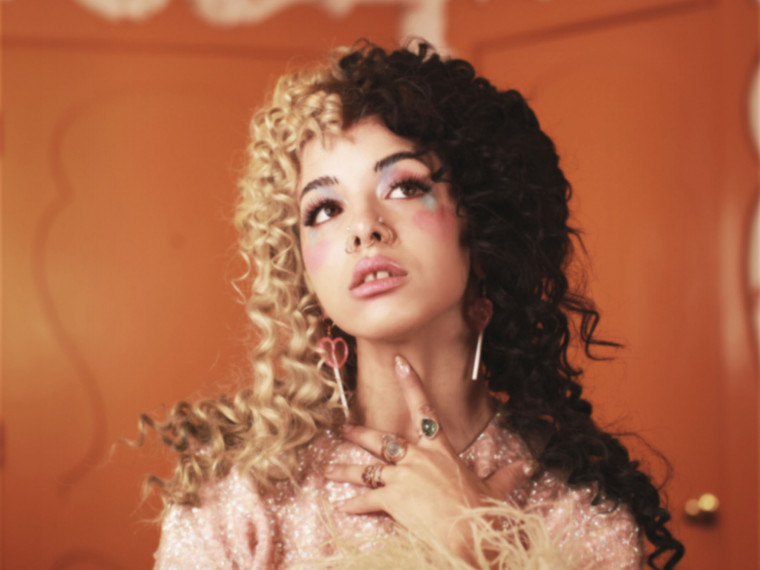 Melanie Martinez's creative drive and talents as a visual artist have always distinguished her from other musicians. After releasing her critically acclaimed, platinum-certified 2015 debut album, Cry Baby—which reached No. 1 on Billboard's alternative albums chart and has amassed over two billion streams worldwide —she conceived of and directed a video for each song on the album. These colorful clips were more like mini-movies, as they traced the traumas and insecurities experienced by the album's titular character, Cry Baby.

The New York native's sophomore album and film, K-12, is another ambitious triumph. For the album, produced by Michael Keenan with the exception of one song produced by Kinetics & One Love (who previously collaborated with Martinez on such hits as “Dollhouse” and “Carousel”), Martinez cycled through sounds and kept whatever ideas inspired her: orchestral flourishes, sinewy beats, lush organ, an antique waltz. As with Cry Baby, the result is that K-12's music is a vibrant and singular melting pot of low-key hip-hop, soulful pop and indie-leaning electro.

"My main goal is to create music that can help people heal," Martinez says. "Because I do believe that music and art is such a strong form of therapy that is very underrated. But, sonically, I really wanted this album to be a reflection of the growth that I have seen within myself. It naturally came together. Music is such an intuitive thing, and most of it was just in the moment."

Martinez's writing process for K-12 was slightly different from her past work in that she gave herself a thematic framework to work within: She landed on a concept based around school after she wrote the album title, and then built the album around that idea. "I would write down a bunch of titles, and then every time I would write, I picked one of those titles that felt like it fit with the music that me and the producer were creating in that moment," she says. "And I would just go with it intuitively and try to write a concept based off of that title."

On a broader level, although K-12's narrative once again comes from Cry Baby's perspective, the album's universe is an expansion of the one introduced in Cry Baby. Using lyrics rich with metaphor, songs address the struggle to find a place to belong—including within friendships, the physical world and romantically—even when fitting into society (and school) feels like an uphill battle. "I really wanted the album to feel like we're stepping out of Cry Baby's personal life," Martinez says. "Now we're going more into how she sees the world—or the world around her, and the other people who are there in that world, and their stories and personal experiences. I really wanted to make the world a little bit bigger."

In a nod to this wider scope, Martinez also wrote and directed a 90-minute movie (also called K-12) that incorporates the album's music and mirrors the themes and characters introduced. Filmed on location in Budapest, Hungary, over the course of nearly three months, the movie focuses on Cry Baby (portrayed by Martinez) and a class of students who find themselves trapped in a horror house-like residential school. As they experience the usual grade school rites of passage—a lunch room food fight, the embarrassment of gym class, a romance with nefarious intentions, courses taught by checked-out teachers—they have to figure out a way to escape.

"My main intention was to show the parallel of life and school—almost like where school is this metaphor as a condensed version of life, where you run into the same personalities as an adult that you did in school, and it teaches you lessons over and over again until you learn them," she explains.

Martinez realized early on in the K-12 album writing process that it was meant to be adapted into a full-length film because of its strong storyline—and by the time she finished writing the album in 2017, she knew exactly how the movie should unfold. "I finally started to gain this clear vision of what I was supposed to write," she says. Although Martinez hadn't written a script before, she quickly became deeply engaged in the process of crafting an extended narrative and creating realistic characters with vibrant backstories.

"The best way I can describe writing music is it almost feels like I'm being possessed by like this beautiful energy of pure bliss and light," she says. "It's such a blur for me. It's almost like an out-of-body experience. Writing this film was much more logical. There was intuitive storytelling, where I knew what I wanted the sentiment of things to be, and then the actual detail of writing the dialogue and creating characters in a detailed way. I was even thinking about their full astrological chart, and how that plays in with the dynamic of other people in the scenes."

The K-12 film boasts a whimsical and surreal vibe, as the plot's atrocities unfold within a majestic, ornate mansion and gorgeous outdoor scenery. Elements of magical realism ranging from the macabre to the playful also enhance the film. The class reaches the prison-like school after their bus floats through clouds and goes underwater, while characters exhibit supernatural powers—for example, Martinez's Cry Baby levitates and uses braids to strangle a mean girl during a recess bullying incident.

"The Cat in the Hat or The Grinch—those movies are the ones I watched as a kid that really stuck with me as an adult," Martinez says. "Or Tim Burton's Edward Scissorhands or Beetlejuice. These are really magical, wacky films, but have deep, very real human undertones to them that you resonate with even on a subconscious level. The superpowers in K-12 are really just a metaphor for consciousness and being able to tap into your abilities as a human."

To that end, K-12 is also rooted in the modern world, and offers pointed commentary on social issues, including racism, discrimination against the transgender community, mental health, and the poisonous oppression of the patriarchy. "Even if you get rid of the person at the top, there's always a person under them that's anxiously awaiting to wreak havoc," Martinez says of the latter. "The movie is less about focusing on one person and more of the system that existed before that person was even there—and how we can really change that internally as well as externally. But it's all obviously metaphorical through visuals and music. There's so many deep layers to the film."

In addition to writing and directing K-12, Martinez oversaw every inch of its execution, including costume design, hair and makeup, and casting choices. "I'm so meticulous about my art and my music," she says. "It's the most important thing to me to execute what it is that I see in my head." Martinez was also completely hands-on with every single creative decision. She traveled to Budapest before shooting began and spent a week scouting filming locations, and chose "every fabric and detail" of K-12's elaborate, vintage-meets-couture costumes—which, in turn, came to life from outfit designs she had drawn in a sketchbook.

The filming process wasn't always perfect, and involved a fair amount of trial and error; for example, certain clothing materials didn't work with the dance choreography and kept having to be repaired, and some of her preferred filming spots in Budapest fell through at the last minute. As a director, Martinez also had to navigate working with different (and sometimes clashing) personalities and was often forced to stand her ground with artistic decisions.

"What I learned through this whole process of creating this film was really to step into my confidence more," she says. "It taught me a lot about my value as a creator, as a person. I wasn't very confident before, and it was easy for people to walk all over me. I was always very decisive of what I wanted creatively, but I definitely let things get under my skin. At a certain point that kind of stopped and I realized, 'This is my film.' At the end of the day I need to be happy with this."

Ultimately, however, any hiccups or obstacles ended up showing the crew the right way forward, and the movie cast especially became tight-knit. "It felt like we had found our soul family," Martinez says. "Everyone is still so close; we go roller skating together every week. It all just felt so meant to be." In a not-so-coincidental twist, the importance of friendship also permeates the movie. Martinez's Cry Baby starts K-12 with one ride-or-die best friend, Angelita, but as the film progresses, she slowly but surely amasses a small group of loyal pals that support her idiosyncrasies. The message is profound: Embracing the unique aspects of your personality and being yourself—even when life hands you curveballs or setbacks—will help you find your place in the world and feel less alone.

"Having a deep sense of love for the body you're in in this lifetime," Martinez says, when asked what she wants people to take away from the K-12 project. "Generally, we really don't have much time. Everybody feels like, 'Oh, life is so slow.' But in reality, things are moving so fast and we can't ever get those seconds back. We might as well be good to ourselves, the other people around us and the world."