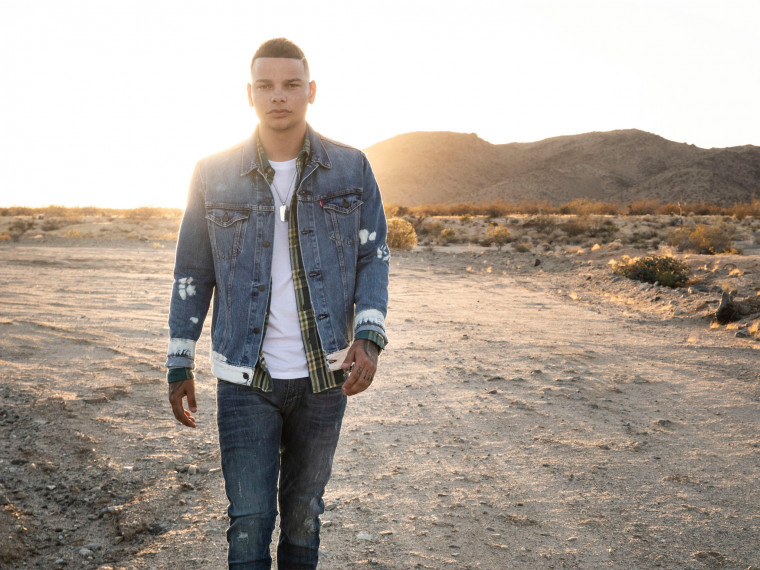 Kane Brown’s hands have the words “Home” and “Sick” tattooed across the knuckles, a letter for each finger. From the serious young man from Fort Oglethorpe, Georgia, much thought went into the ink, a reflection of traditional values shooting through his progressive country.

If the mixed-race vocalist with the deep tenor that mixes Vern Gosdin’s oak with Randy Travis’ presence didn’t look like an eye-catching model, it would be easy to recognize the resemblance of his origin story to those of Merle Haggard and Johnny Cash. Haggard’s family were dust bowl immigrants, living in a box car, trying to make ends meet, and Cash’s parents raised him in an Arkansas’ sharecroppers’ shack as they worked hard to provide for their children.

And like Haggard and Cash, the triple American Music Awards winner is determined to break ground as he creates a distinctly country music of the moment.

Debuting at No. 1 on the Billboard 200, Brown’s new album Experiment released November 9. This follow-up to his Platinum-certified 12-week No. 1 self-titled debut album pushes his kind of country forward to smooth ballads and brisk midtempos that capture the soul of commitment, the sweep of desire and the stumble of doubt. But rather than just follow the pack, he reaches back to embrace elements of the traditional that are missing in so much of today’s modern pop-centric country.

“I’m trying to bring the traditional aspects of instruments back into today’s country, and not just use your loop heads or fake drums. I just want to get as close back to that sound as possible while still sounding hip.”

For the lurching “Baby Come Back To Me,” with its plea to a woman gone, the thick vocal harmony ‘90s country-evoking “Short Skirt Weather,” the steamy soul grooved “Weekend” and the Muscle Shoals guitar-tinged slinky midtempo shuffle “Good As You,” Brown explores what’s possible in today’s country without ever losing his focus.

Walking the line suits the quiet talking man who wrote 11 of Experiment’s dozen songs. Whether embracing classic misdirection on “One Night Only” and “It Ain’t You, It’s Me,” the code of values defining “My Where I Come From” or the yearning “Homesick,” which grounds the reality of chasing the dream with ribbons of fiddle across a sweeping melody.

“I was on the road when I got the tattoo,” he says looking at his knuckles, “And it stuck out as a great song title, so we wrote it. (Success) kind of feels fast and slow at the same time. Then two

years later, you’re like ‘Damn, that was fast.’ But at the time, it feels so slow, because you’re gone so much.”

Kane Brown was a certified phenomenon long before the majors came calling. Through online videos, downloads, streams and virulent word of mouth, the young man working at Lowe’s and Target was a certifiable sensation through fans posting and “a crazy dream” turning into a musical mandate.

“I didn’t think (music) was going to be like a job. I thought it was just writing songs in the meantime for fun. When I put (‘Sober’) on iTunes and Facebook, and it ended up getting like 32 million views, I was shocked. Suddenly, ‘Sober’ was competing with ‘Die A Happy Man’ when it was at its peak.”

Modest and soft-spoken, Brown may have first tasted commercial success over a year prior, but, by the time he released his RCA Nashville/Zone 4 debut album in December 2016, Brown was well on his way to making history. With the nearing-quadruple-Platinum multi-week No. 1 smash “What Ifs,” featuring former chorusmate Lauren Alaina, he became the first (and remains the only) artist to top all five Billboard country charts concurrently: Top Country Albums, Hot Country Songs (“What Ifs”), Country Airplay, Country Streaming Songs (“What Ifs”) and Country Digital Sales (the nearing-triple-Platinum multi-week No. 1 “Heaven”).

At the close of 2018, Kane Brown’s Experiment was named one of the 10 best albums of the year by the New York Times and “Heaven” was singled as Billboard’s most-played country song of the year.

For a kid growing up, hanging out in the Walmart parking lot of a string of small towns who was raised primarily by his Mom, Aunt and Grandmothers, Brown is intent on making his music connect with anyone who grew up like he did. Beyond his deep respect for women, he has a strong sense of what makes songs work.

“I stay away from the negative,” he confesses, “and that’s why I’m so happy in my life. That kind of goes back to the sounds on the record, even when it sounds like a happy song, there could be heartbreak to it, but I want to make it sound positive.

“There’d be times when we were writing, and it was uptempo, but didn’t really work ‘cause it was a positive song, so I’d say, ‘Let’s kind of do a twist to it, put a slow sounding thing to so, so it sounds like sad, but has a positive outlook.’

“I love word play. I love opposites and things like that. I feel that’s the major thing I run for, and probably a lot of writers. It’s the opposites attract each other, and stuff people wouldn’t really think about. And that really works with the music, too.”

“For a couple songs, we needed a swampier feel. With ‘Baby Come Back,’ guys might listen to how it sounds, and it’s what intrigues dudes. Or ‘It Ain’t You,’ has that super-rocking feel with all the solos and stuff.

“A lot of guys are very prideful of what they think. I’ve had guys come and be like, “’Heaven’ is everything my wife would like to hear in a song, and you did that. So, thank you.’ It’s cool, ‘cause I was trying to do that, but make it a little more masculine, you know...”

Experiment, beyond the music, sees Brown pushing what was being said. Always a strong proponent of relationship songs, he also had a stronger sense of what and how he wanted to communicate. “I kind of realized that I wanted to say more, and kind of going back to the live show, what kind of songs I wanted out there.”

To that end, “American Bad Dream” is a taut bit of rock – all smoky groove, buzzy National guitar and Brown’s resonant baritone – stretched across lean acoustic country verses. Tackling the state of the nation, he juxtaposes the reality of being a young black man when he was in high school and today.

“‘Learning’ from my first album was super-heavy, but it was about my life. I wanted a serious song, but about what’s going on right now, because I don’t feel like enough people are talking about this stuff. I’m not saying that guns are good, or that guns are bad, I’m just saying what the news has already told everybody. I’m just saying, ‘Let’s figure something out.’

“That’s why the first verse of ‘American Bad Dream’ is about when I was a freshmen, what most dudes worry about is losing their virginity, just working on grades and getting laid. But that’s not the biggest problem – and it’s because people are being dumb. And my sense when we were writing this, is just that the devil is taking over, and people aren’t realizing it. They’re jumping on sides, without realizing we need to find a way to meet in the middle. And I was trying to fix it (by pointing that out).”

Finding the common ground, coming together and understanding other people’s fears is pivotal to the next-generation star. Whether it’s the grown-up relationship truth inside the silky “Work” or the piano balladry of “Live Forever,” it’s the connection that transforms the music – and the man singing.

“I believe men and women are equal. I respect people,” he explains of his very grown-up approach to love songs and being young. “I’ve got people who like all kinds of music, and say, ‘I don’t like country music, but I like you.’ There are the country radio fans, who hear the songs, and the Kane Brown fans who know songs radio doesn’t touch, and it all good.

“A song like ‘Lose It,’ unless you’re a diehard fan, you’re not gonna pick it up and play it; but if it comes on, it’s so rocking live, just in-your-face-live, and that works.”

Pausing he smiles reflectively. He knows the unsaid, and while it’s not been brought up, he realizes, it might as well be asked. As a breakout Cherokee/African American, his place in today’s country speaks to the shifts in the U.S. “I’d just say, ‘I’m just a guy who wants to make people realize you shouldn’t judge a book by its cover.’ I’m just somebody who’s wanting, no matter what race you are, if you like country music, if you want to be in country music, then you can be. Just look at me, and come on.”