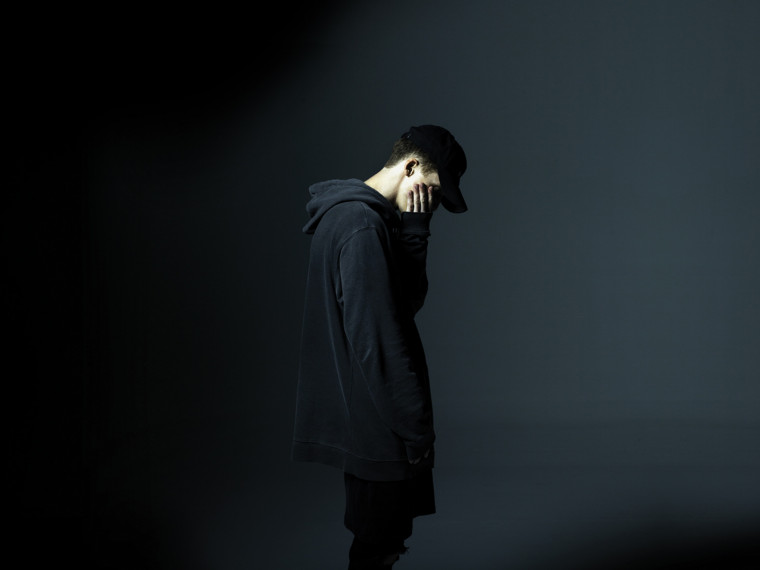 “I like to be a little mysterious, so the music tells my story,” explains Nathan Feuerstein, better known by his initials, NF - the name under which he’s become known as one of the most exciting new rap/alternative artists working today. The story that NF captures in his music proves deeply personal and compelling; that’s why he titled his second album Therapy Session, released on April 22, 2016 by Capitol Music Group.

Following on the success of NF’s 2015 Capitol debut Mansion, Therapy Session has taken the 25-year-old Michigan-raised MC to new heights. Mansion would go on to exceed 53 million streams thanks to singles like “Wake Up”; its powerful anthem “Intro” would also feature in the season finale promo campaign of Empire. In its first week of release, Therapy Session, however, would enter the Billboard album charts at number 12, cementing that NF was an artist to be reckoned with - on his way to superstar status of his own making. The furious, complex flow and gritty revelations of epic album opener “Intro 2” (“You call it music - I call her my therapist/She keep on tellin' I have been carrying way too much baggage/I need to take care of it/I know she's right, but man it's embarrassing/Music has raised me more than my parents did”) reveal NF’s lyrical origins. “I came listening to battle rap,” he explains. “I studied the Smack DVDs obsessively.” But elsewhere - from the acoustic guitars and sung hooks of “Oh Lord” to the moving, soulful melodies permeating songs like  “I Just Wanna Know” and “How Could You Leave Us” - Therapy Session reveals NF’s growing musical maturity. “When I was younger, all I listened to was hip-hop,” he explains. “Now I listen to everything from Ed Sheeran and Adele to film soundtracks. Wherever the beat comes from, it pulls out whatever’s inside of me.”

NF has come a long way from his humble origins filled with small-town tragedy. Hailing from Gladwin, Michigan - “a town with three lights and no city” he notes on “Intro 2” - NF grew up in a home broken by drugs and violence. His mother addicted to pills, her boyfriend physically abusive, young Nathan found solace in music at twelve years old. Sitting in his parents’ van, he’d write songs for hours, recording freestyle raps on a karaoke machine. Just as Nas inspired the young Marshall Mathers’ style, NF was first inspired by the music of Eminem. He identified with him instantly: like him, Eminem was a Caucasian MC and hip-hop fanatic from his home state, with rhymes that ruthlessly explored his troubled family relationships. “Eminem made me feel something I couldn’t describe,” he explains. “He created a lane of honesty that was so intense, so vulgar, so compelling, saying things I’d never said or thought before. I had a lot of anger, and through him, I learned to express myself.” From there, NF pushed himself to explore different rap styles (he cites Kendrick, Kanye, Drake, Royce da 5’9” and Slaughtahouse among his current favorites), driving him to find his own voice. “I’d been so heavily influenced by Em,” NF says, “But artists that don’t grow out of that don’t go anywhere. Ultimately, I came to understand that what Eminem stood for above all else was ‘be yourself.’”

NF threw himself into a music career. However, having signed a dead-end deal to a small label that was going nowhere and barely supporting himself as an electrician, things changed in 2014 when he found himself in the studio with Grand Rapids, Michigan-based producer Tommee Profitt (who, along with David Garcia, would go on to produce allof NF’s major-label releases). That session produced the emotional, gripping track “Wake Up”: it was the song that provided the artistic breakthrough NF had been waiting for, and drew the attention of Capitol Records, leading to a recording contract. “‘Wake Up’ was the start of where I’m at now,” he explains. After signing with Capitol, NF turned again Garcia and Profitt to create Mansion. “The title is a metaphor,” he says. “Each song is a different room in my mind - and then it goes downstairs to a dark place even I was surprised I could talk about.”

The success of that album pushed NF’s ambition: he began recording Therapy Session just a week after Mansion’s release. “Therapy Session was literally like a book, bringing together the chapters of where my life was at,” he says. “It was me maturing, asking ‘Why did this happen?’ The album was the answer to those questions.” True to its title, Therapy Session found NF fearlessly exploring his trust issues, unhealthy relationships, and his uneasy relationship to success. Its core, however, lay in the pain NF felt in the wake of learning his mother had died of a drug overdose. “Songs like ‘How Could You Leave Us’ deal with my mother’s death very honestly and specifically,” he says. “When that happened, all these feelings starting coming out in the rhymes. It was emotional, but in a different way.”

Therapy Session also found NF taking his lyrical gifts to their fullest extent - sometimes creating six different flow patterns in the same song. It also clearly defined who he was as an artist: in the title track, he states “this isn’t music for people who sit in the pews and pray in churches.” Before Therapy Session, NF had been pigeonholed as a Christian music artist. “I’m a Christian, but I don’t make Christian music,” he says. “You’re not going to reach everyone with just one point of view.” Like, say, Rakim’s open embrace of Islam, or Drake’s Jewish background, NF claims his faith is just one part of his complex identity. “I write about things I’m actually dealing with,” NF says. “You don’t have to be Christian to relate to them.”

“There’s something about music that’s believable,” he continues. “Feeling those emotions in music what inspired me to do this - to try to be an artist and make this my life. I have a real passion for this; I’m not satisfied just being okay. I like to challenge people because I like to be challenged. Put me in a room with any rapper, and I’ll hold my own and just be myself. I’m here.”